Michelle Romero was elected at-large to the Henderson City Council in April 2019, representing Ward I.
Councilwoman Romero serves with the Mayor and her fellow councilmembers as the legislative branch of the Henderson community, responsible for setting policies and making decisions concerning many aspects of local government for Nevada’s second largest city, which has been recognized as one of the best places to live in America and one of the nation’s safest cities.

Prior to her current role as councilwoman representing Ward 1, Michelle worked in several capacities with the city, most recently as manager of redevelopment from 2007 to 2016. During her time as the agency manager, she oversaw the renaissance of the Water Street District, which included new housing and retail opportunities, jobs and entertainment venues. Additionally, she managed the agency through the completion of infrastructure improvements in Tuscany, and the negotiation of Owner Participation Agreements for tax increment reimbursement for the Cadence, Union Village and Henderson Hospital projects, each of which has brought hundreds of jobs and billions of dollars in investment to the City. She also oversaw the creation of both the Eastside and Lakemoor redevelopment areas.

During her time with the Redevelopment Agency, Michelle worked with local businesses to form the Water Street District Business Association and brought the Super Run Car Show to Henderson in 2000, which annually generated millions in visitor spending in Henderson. In addition, she created the Farmer’s Market in 1999, and is still operating. In addition, she managed the Agency’s creation of numerous financial assistance programs that help business owners, residents, and developers to reinvest in aging areas of the community. Passionate about supporting, growing and improving her community, Michelle has led numerous initiatives and worked side-by-side with city officials, developers, business owners and constituents to make Henderson one of the best cities in which to live and work. 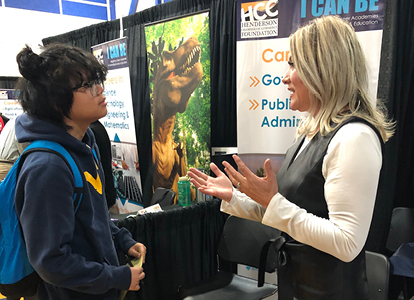 Education
Michelle graduated with a bachelor’s degree in public administration from Upper Iowa University and is the owner of Michelle Romero Consulting, which specializes in Redevelopment, Economic Development and Planning issues.

In addition, she is a certified planner with the American Institute of Certified Planners (AICP) designation.
Family & Community:
Born and raised in Henderson, Michelle has always prioritized family and her involvement in the community. As a mother of four boys, throughout the years, she has served as both a Boy Scout Leader and Booster Club President.

In addition, she is a certified planner with the American Institute of Certified Planners (AICP) designation.

In her capacity of public service, she has enjoyed advocating for organizations that assist the community’s youth, no matter their socioeconomic background. She served on the Community Advisory Board for Henderson Hospital and as a board member of Parallel Innovation Labs, a non-profit organization created to build educational and laboratory infrastructure to have a rich, science, and tech ecosystem in southern Nevada. For the past three years, she has assisted the Southern Nevada Area Boy Scouts of America Council in planning and executing their largest annual fundraiser.

Married to her husband, Ben Romero, since 1986, they have four sons and seven grandchildren. 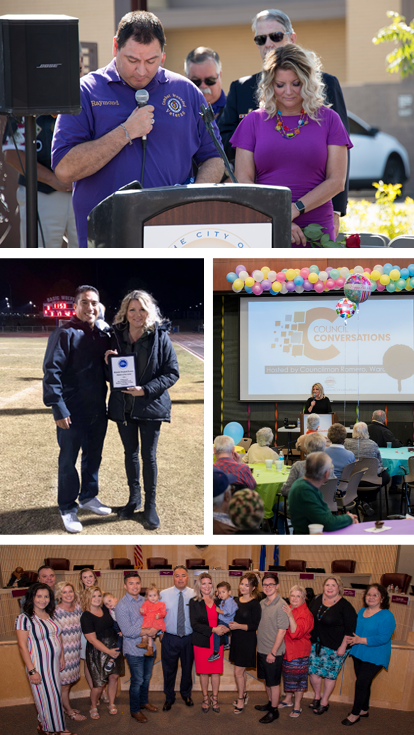 Leadership:
Beyond her duties as councilwoman, Michelle has dedicated much of her time to mentoring young women and girls in her community. With a thorough understanding of the difficulties women face in male-dominated industries, Michelle has helped women navigate their paths to success within their fields and has served as a role model to many, showcasing that women are capable of rising above the glass-ceiling and holding leadership positions. She especially enjoys working with women and girls interested in STEAM.

In the various roles that she has held throughout her professional career, Michelle’s goal has remained the same – to help make Henderson a great place to call home. She has led various campaigns and directives to grow the city’s economy, through times of prosperity and difficulty. During the state’s response to the COVID-19 pandemic, Michelle worked especially hard to assist local businesses. She spearheaded the creation and distribution of more than 100 Henderson-based restaurant grants, providing much-needed financial assistance to restaurants struggling to stay open amidst the pandemic.

Michelle’s dedication to helping her community is unwavering. She leads with kindness and has an unparalleled commitment to Henderson. She is looked to as a source of inspiration, motivation, encouragement, and reliability. Through not only her words, but through her actions, she has been instrumental in making Henderson the incredible city that it is today, and the exceptional city it will be tomorrow.
Awards:
Michelle was recognized in 2020 by the National Association of Women Business Owners with a Woman of Distinction Award in the Government/Corporate Division for her leadership and achievements throughout her career as well as Elected Official of the Year from the Nevada Chapter of the American Planning Association.

This year she was honored by the Urban Chamber of Commerce with the 2021 Women in Politics award, given to individuals who have provided extraordinary service and served in a leadership role through diversity. 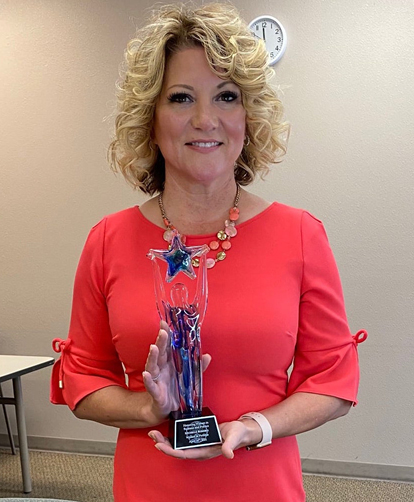